The Society of Applied Spectroscopy is very pleased to announce our 2020 Award Winners!

Are you Signed Up For SAS Social Media????

Looking for a New Instrument or Product? Check out SAS' Spectroscopy Marketplace

During this pandemic we have all learned you cannot take anything for granted.  We the staff and family of SAS would like to shout out to all of our corporate sponsors!

Out the Latest Issue of SAS' e-Newsletter

Looking for Employment or Need to Post an Opening? Check Out Our Employment Site Powered by YMCareers.

We can't be everywhere so we need you to tell us about upcoming events, awards and recognitions, exciting things in spectroscopy, etc. so we can keep our website and social media up to date. Submit something today! 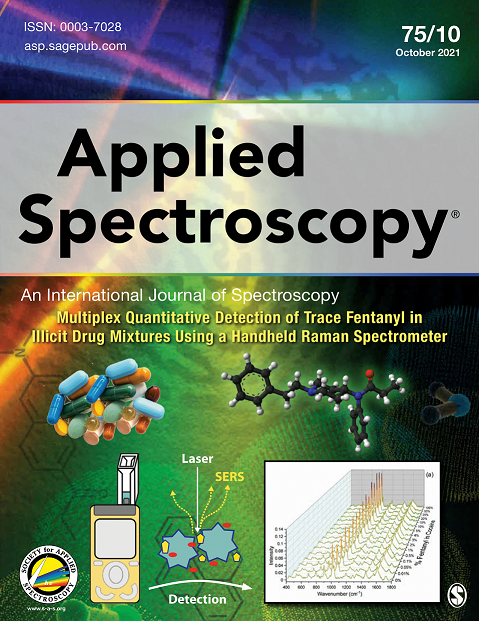 In 2019 more than 73,000 Americans died from illicit drug overdoses.  According to the National Institutes of Health “Synthetic opioids, including fentanyl, are now the most common drugs involved in drug overdose deaths in the United States. In 2017, 59. percent of opioid-related deaths involved fentanyl compared to 14.3 percent in 2010.”  May of these involve cocaine and heroin that have been spiked with small amounts of fentanyl - the users are not aware that they are using it.  Because of this, recently there has been increased interest in a “street-level” analytical methodology to screen drugs for adulteration.
In this months featured article, Ling Wang, Mario O. Vendrell-Dones, Chiara Deriu, Sevde Doğruer, Peter de B. Harrington, Bruce McCord from the Department of Chemistry and Biochemistry, Florida International University(LW, MVD, CD, SD BC) and Miami, FL USADepartment of Chemistry and Biochemistry, Ohio University, Athens, OH (PH) describe the application of Surface-Enhanced Raman spectroscopy (SERS) as a useful alternative to current screening procedures that permits detection of trace levels of fentanyl in mixtures.  The authors demonstrate that multivariate methods, combined with SERS, allows the determination of fentanyl as low as 0.05% in simulated seized heroin and 0.10% in simulated seized cocaine samples.

Successful completion of a doctoral degree in chemistry or a related STEM program with a focus on spectroscopy from an accredited college or university, and at least five (5) years of full-time equivalent professional experience* after degree, OR at least ten (10) years of professional experience* after completion of the minimum education requirements for certification (qualifying bachelor’s degree or completion of required coursework in post-baccalaureate courses). The committee may consider experience over education in its review.

Successful completion of a master’s or higher degree in chemistry or a related STEM program with a focus on spectroscopy from an accredited college or university and at least two (2) years of full-time equivalent professional experience* after degree; OR at least five (5) years of professional experience* in addition to the education requirement for Associate Spectroscopist; The committee may consider experience over education in its review.

Here are some of the great benefits you get as a SAS member. To see a list of all of our benefits and to JOIN or RENEW please click HERE