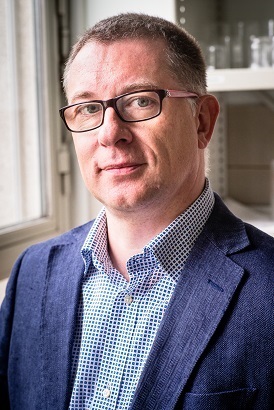 Frank Vanhaecke (°1966, Ostend, Belgium) received a PhD from Ghent University (Belgium) in 1992. Currently, he is Senior Full Professor in Analytical Chemistry at Ghent University, where he leads the ‘Atomic & Mass Spectrometry – A&MS’ research group that is specialized in the determination, speciation and isotopic analysis of (trace) elements via ICP-mass spectrometry (ICP-MS). His group studies fundamentally-oriented aspects of the technique and develops methods for solving challenging scientific problems in an interdisciplinary context. Nowadays, specific topics of research include the direct bulk and spatially resolved analysis (including depth profiling and 2- and 3-dimensional elemental mapping) of solid materials by means of ICP-MS using laser ablation (LA) for sample introduction, the development of speciation strategies based on HPLC-ICP-MS for ADME (absorption, distribution, metabolism and excretion) studies in cooperation with the pharmaceutical industry and isotopic analysis using multi-collector ICP-MS. Methods for high-precision isotopic analysis are developed for applications in, among other, the fields of archaeometry, geo- and cosmochemistry and medicine (“isotopic diagnosis”). So far, Frank’s scientific research has resulted in ca. 350 publications in peer-reviewed journals with >8000 citations, resulting in an h-factor of 45 (according to ISI’s Web of Science). He is a member of the Advisory Boards of JAAS – Journal of Analytical Atomic Spectrometry, ABC – Analytical and Bioanalytical Chemistry and SAB – ‘Spectrochimica Acta B and acted as chair of the Editiorial Board of JAAS from June 2012 to June 2016. At the 2011 Winter Conference on Plasma Spectrochemistry (Zaragoza, Spain) in February 2011, Frank received a ‘European Plasma Spectrochemistry Award’ for his group’s contributions to this research field. In 2013, he was designated ‘Fellow of the Society for Applied Spectroscopy – SAS’.