Mounted on the rover's robotic arm, SHERLOC uses spectroscopy to search for organics and minerals

Various SAS members are involved in its design:

Chemist’s Tech Makes it to Mars

The Society of Applied Spectroscopy is very pleased to announce our 2020 Award Winners!

Are you Signed Up For SAS Social Media????

Looking for a New Instrument or Product? Check out SAS' Spectroscopy Marketplace

During this pandemic we have all learned you cannot take anything for granted.  We the staff and family of SAS would like to shout out to all of our corporate sponsors!

Out the Latest Issue of SAS' e-Newsletter

Looking for Employment or Need to Post an Opening? Check Out Our Employment Site Powered by YMCareers.

We can't be everywhere so we need you to tell us about upcoming events, awards and recognitions, exciting things in spectroscopy, etc. so we can keep our website and social media up to date. Submit something today! 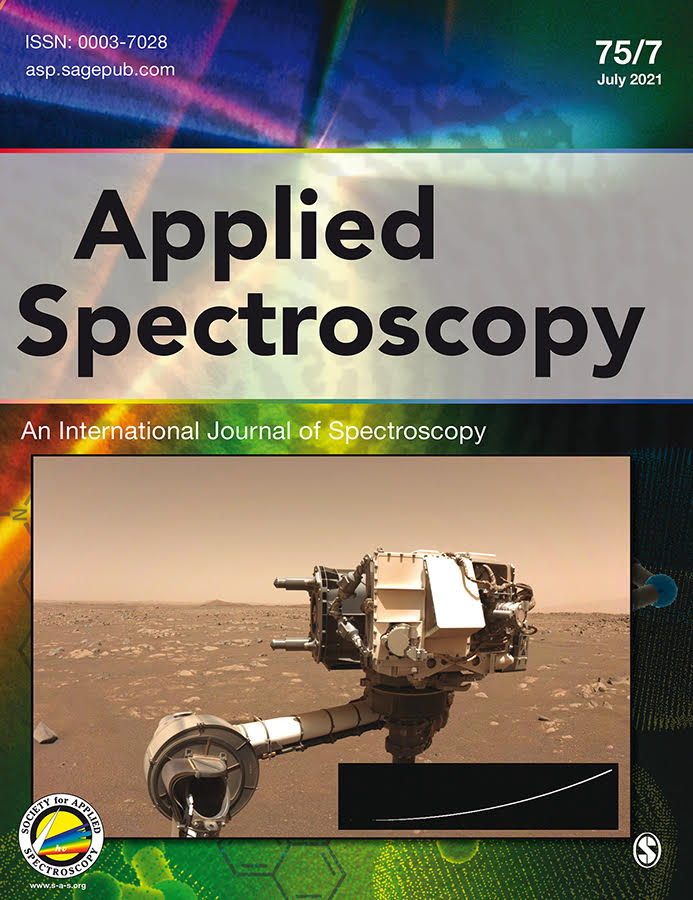 On 18 February 2021, the NASA Perseverance rover touched down in Jezero Crater on Mars. NASA‬ ‪scientists believe that 3.5 billion years ago the area where the crater is located was filled with water, a lake‬ ‪about the size of Lake Tahoe, which created an ancient river delta. According to NASA, the Perseverance‬ ‪mission is to "seek signs of ancient life and collect samples of rock and regolith (broken rock and soil) for‬ ‪possible return to earth".‬ ‪Central to the Perseverance mission is an array of spectroscopy instruments that have been designed to"survive" the landing, stay aligned, and function in the harsh Martian climate which can have daily temperature‬ ‪extremes of –70 to +20 C. The instruments are marvels of science and engineering.‬ ‪At the end of the Perseverance robot arm is the Scanning Habitable‬ ‪Environments with Raman and Luminescence for Organics and Chemicals (SHERLOC) instrument. SHERLOC‬ ‪is a combination fluorescence and UV resonance Raman spectrometer whose function is "fine-scale detection‬ ‪of minerals, organic molecules, and potential bio‬-‪signatures". ‬

The feature article in the July issue of Applied Spectroscopy is titled "Calibration of the SHERLOC Deep Ultraviolet Fluorescence–Raman Spectrometer on the Perseverance Rover" by Kyle Uckert et al.  from Jet Propulsion Laboratory (JPL) California, California Institution of Technology, Photon Systems, Inc., University of Pittsburgh Chemistry Department, NASA Johnson Space Center and Jacobs Technology, Inc.  The paper describes the design and calibration procedures for the SHERLOC spectrometer. SHERLOC uses a DUV laser to map a postage stamp-sized area of a rock to characterize mineralogy and organics on the surface of Mars using deep UV Resonance Raman and fluorescence spectroscopy.

For a related feature read the interview with Professor Sanford Asher on the history and design of the SHERLOC instrument in the April Newsletter!

Cover photo caption:  The SHERLOC spectrometer on the Perseverance rover’s arm in Jezero Crater on Mars.    The inset shows an image of the illuminated portion of the CCD, which is curved to enable simultaneous detection of Raman and fluorescence photons.

Successful completion of a doctoral degree in chemistry or a related STEM program with a focus on spectroscopy from an accredited college or university, and at least five (5) years of full-time equivalent professional experience* after degree, OR at least ten (10) years of professional experience* after completion of the minimum education requirements for certification (qualifying bachelor’s degree or completion of required coursework in post-baccalaureate courses). The committee may consider experience over education in its review.

Successful completion of a master’s or higher degree in chemistry or a related STEM program with a focus on spectroscopy from an accredited college or university and at least two (2) years of full-time equivalent professional experience* after degree; OR at least five (5) years of professional experience* in addition to the education requirement for Associate Spectroscopist; The committee may consider experience over education in its review.

Here are some of the great benefits you get as a SAS member. To see a list of all of our benefits and to JOIN or RENEW please click HERE